Singapore Remains One Of The Least Corrupt Countries In The World

Singapore continues to see a low incidence of corruption. The number of new cases registered for investigation by the Corrupt Practices Investigation Bureau (CPIB) remained low and is consistent with the trends in previous years. Private sector cases continue to form the majority of CPIB’s investigation. Singapore remains well-regarded internationally for our anti-corruption efforts. In the Transparency International Corruption Perceptions Index (TI-CPI) 2018, Singapore was ranked the third least corrupt country out of 180 countries and territories.

2. While Singapore has done well in our fight against corruption, there is no room for complacency. 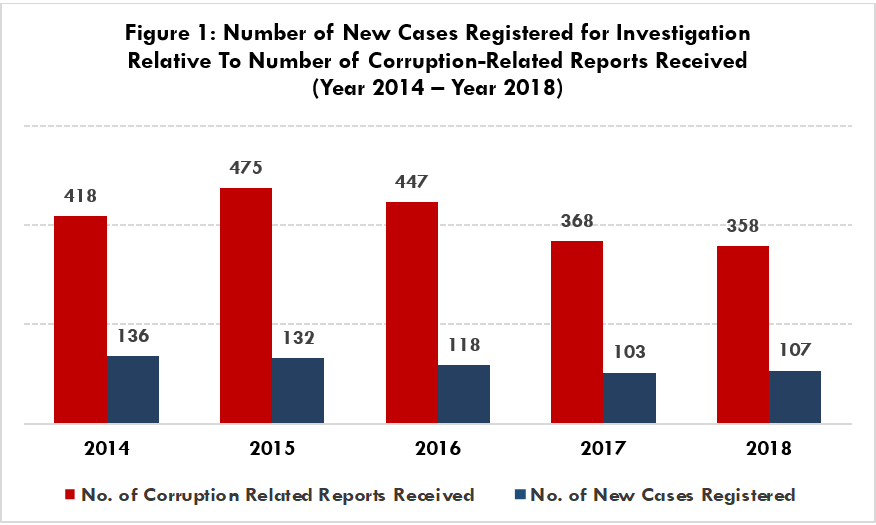 4. A report is registered for investigation if the information received is pursuable. This is determined by the specificity and quality of relevant information provided. Non-pursuable corruption reports are those with vague or unsubstantiated information which did not provide sufficient leads for investigation to be initiated by the CPIB. For non-corruption related reports received by the CPIB, they would be referred to the relevant government agencies for action, where applicable.

Reports Made in Person Remain the Most Effective Mode

6. The CPIB takes a serious view of all reports and information that may disclose any offence under the Prevention of Corruption Act. They are thoroughly deliberated regardless of the nature or amount of gratification, or whether the complainant is named or anonymous. 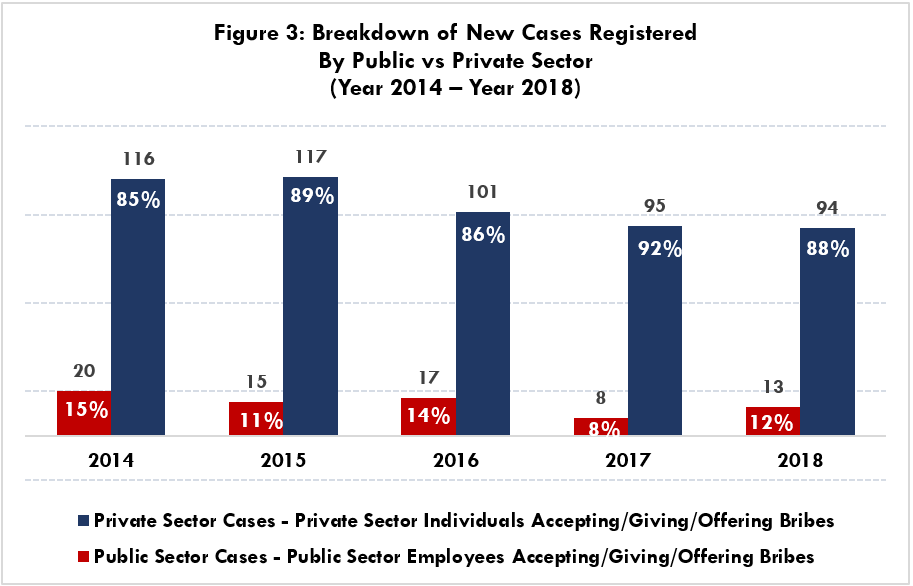 7. Cases involving private sector individuals continued to form the majority, or 88%, of all the new cases registered for investigation by the CPIB in 2018. Of these, 15% involved public sector employees rejecting bribes offered by private sector individuals. The proportion of public sector cases remained low, accounting for 12% of all cases registered for investigation in 2018. (Figure 3). 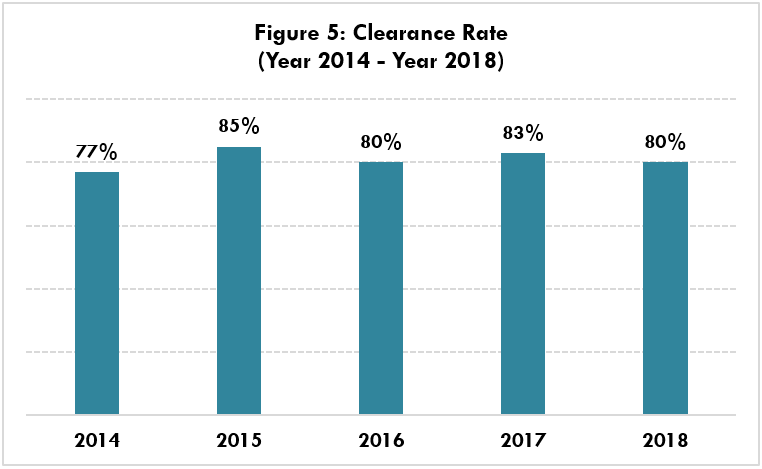 10. The CPIB has consistently achieved a high annual clearance rate, completing investigations into 80% of the number of subjects investigated in 2018 (Figure 5). 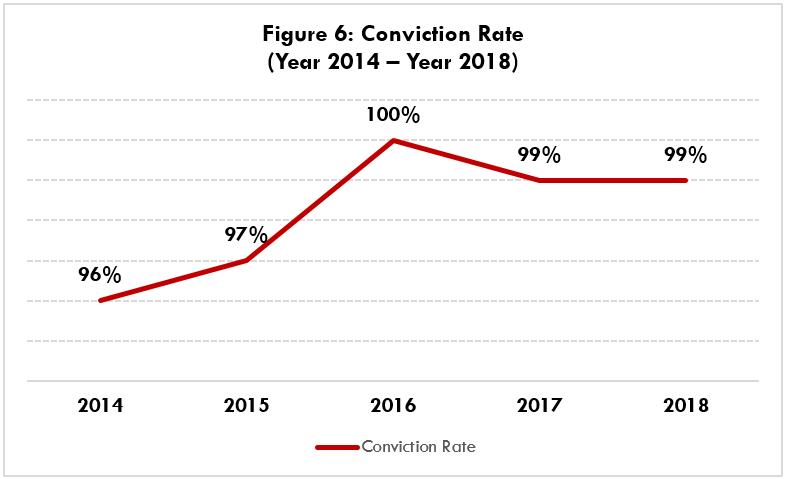 11. The conviction rate remained high, averaging 98% over the past five years (Figure 6).

12. Singapore is well-regarded internationally for our anti-corruption work, and has gained a strong reputation as one of the world’s least corrupt countries.

13. In 2018, Transparency International ranked Singapore in joint 3rd position (alongside Finland, Sweden and Switzerland) out of 180 countries and territories with a Corruption Perceptions Index (CPI) score of 85. This was Singapore’s best ranking since 2010, and our best score since 2015. We remained the only Asian country in the top 10 ranking. 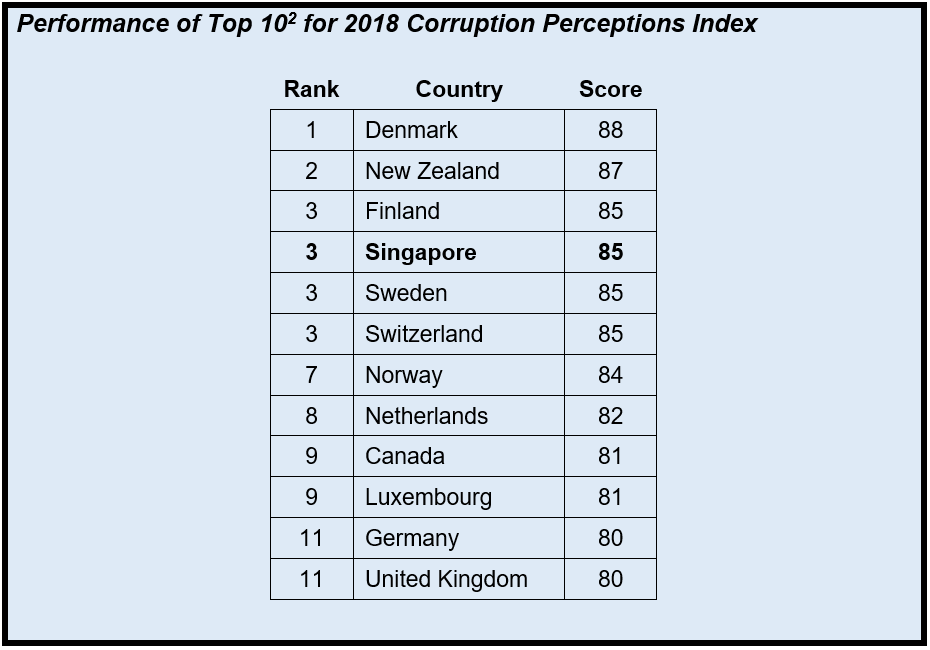 15. In the Political and Economic Risk Consultancy (PERC)’s 2018 Report on Corruption in Asia, Singapore was also rated the least corrupt country in the region, an accolade we have maintained since 1995.

16. Corruption is hard to detect, with perpetrators going to great lengths to conceal the corrupt transactions and proceeds. The nature of corruption investigations differs from investigations into other crimes such as cheating or robbery where the investigators can typically rely on the victim’s testimony. For corruption, both the giver and receiver of bribes are offenders who will avoid telling the truth to shield themselves from criminal prosecution. Notwithstanding these challenges the CPIB continues to fight corruption with resolve, by strengthening our interview tradecraft, as well as intelligence and investigative support capabilities.

17. The success of the majority of CPIB’s investigations stems from the tenacity and interview skills of our Corrupt Practices Investigation Officers (CPIOs).

18. Our Intelligence Division and other investigative support capabilities such as computer forensics, forensic accounting and polygraph testing also play important roles in our investigations. The CPIB has a highly specialised unit which conducts financial investigations to enable expeditious identification, tracing, and seizure of illicit proceeds, which is key to preventing the dissipation of corrupt proceeds. The CPIB has further developed the capabilities of our Computer Forensics Branch (CFB) to support our investigation, particularly for cases where extracting digital evidence could prove vital. The use of polygraph has also proven effective in terms of supporting CPIB’s investigations through providing new leads for investigation officers to probe further.

19. The tenacity of CPIB officers and our investigative capabilities have been critical in our investigations, as illustrated through the cases highlighted below.

Case 1 – Building A Case of Corruption

a. Intelligence work, computer forensics and the tenacity of CPIB officers were instrumental in a case involving the construction industry. Tan Ken Huat (“Tan”) was the Managing Director of Shanghai Chong Kee Furniture & Construction Pte Ltd (“SCK”) and Teo Wee Liap (“Teo”) was the Director of Superiortec Pte Ltd (“Superiortec”). Superiortec was a subcontractor of SCK. Based on an anonymous report received, CPIB gathered intelligence and conducted investigations into the allegations made. It was revealed that Tan and Teo had corruptly given Soh Yew Meng (“Soh”), the Director of the Building Enhancement Department of a hotel establishment, S$300,000 as a reward for furthering their business interests in addition and alteration works at the hotel. These individuals were initially uncooperative, but CPIB investigation officers achieved a breakthrough in the case after prolonged and intensive interviews. Computer forensics work done by the Bureau also surfaced incriminating evidence from devices belonging to these individuals. Tan was sentenced to 9 months’ imprisonment in August 2018, while Teo was sentenced to 6 months’ imprisonment in June 2018. Soh was earlier sentenced in 2017 to 14 months’ imprisonment.

Case 2 - Putting the Brakes on Corruption

b. The use of polygraph testing coupled with the painstaking work of CPIB officers helped solve this case. Preliminary investigations could not establish any corrupt dealings between Gulzar Raja Singh Sandhu (“Raja”), a legal executive with Clifford Law LLP, and Traffic Police clerk Khatijah M. Manap (“Khatijah”). A breakthrough was finally achieved through rigorous bank statements analysis. CPIB investigation officers also spoke to more than 30 individuals, who were victims of road traffic accidents, to uncover crucial information related to the case. Polygraph testing suggested that Raja had not been entirely truthful during the interviews. It was eventually revealed that Raja had given Khatijah at least S$2,500 in exchange for obtaining the contact details of traffic accident victims. Raja would then approach these individuals to engage the law firm he was working for. Raja was sentenced to 18 weeks’ imprisonment for corruption, and offences under the Official Secrets Act and the Penal Code in November 2018. Khatijah was earlier sentenced in 2016 to 18 weeks’ imprisonment and ordered to pay a penalty of S$2,500.

Case 3 – No Escaping the Long Arm of Law

c. In a case that extended beyond Singapore’s borders, close cooperation with local and foreign law enforcement agencies, and relentless efforts by our investigation officers led to a positive outcome. From 2012 to 2013, Law Eng Kiat (“Law”), a Malaysian based in Singapore as the Chief Operating Officer at LCI Investment Pte Ltd (“LCI”), was found to have obtained bribes from a Filipino, Mary Ann Joloro Madragon (“Mary Ann”), the Managing Director of Tele-Skills Call Centre. CPIB officers travelled to the Philippines where Mary Ann was based, and worked with the local law enforcement agency there to conduct interviews and obtain relevant records. It was established that Law had obtained approximately RM153,000 and US$74,000 overseas in return for awarding and renewing a telemarketing contract to Tele-Skills Call Centre. While Law was based in Singapore, he had directed Mary Ann to inflate the contract fees and for a portion of the fees to be transferred to a bank account which Law operated in Malaysia. Law, who had fled the country, was subsequently apprehended in Malaysia with the help of Malaysian authorities and extradited back to Singapore by the Commercial Affairs Department, which was separately investigating him for other offences. Law was sentenced to 22 months’ imprisonment in May 2018 and ordered to pay a penalty of S$152,606 for corruption and offences under the Penal Code.

d. In a case involving a technical officer with the Public Utilities Board (PUB), CPIB officers relied on their interview skills to uncover wrongdoings and forensic accounting to identify and trace the proceeds of crime. In the course of corruption investigations, it was revealed that Mohamed Sa’ad Bin Mohamed Ali (“Sa’ad”) had cheated his colleagues into approving purchase orders worth approximately S$1,900,000 to businesses controlled by him. CPIB officers managed to obtain a confession from Sa’ad during interviews conducted. This case involved more than 700 transactions that took place between 2005 to 2012. Although the transactions were voluminous and dated, our investigations found that Sa’ad had spent these illegally obtained proceeds on a vehicle, an insurance policy, a Gold Certificate, a factory unit, and his mortgage loans. Action was taken by the CPIB to seize and disgorge the proceeds of crime from Sa’ad. In November 2018, Sa’ad was sentenced to 45 months’ imprisonment for cheating and money laundering. The assets seized were liquidated and returned to the PUB.

20. These cases illustrate the importance of investing in our people to sharpen their skills particularly in the areas of interview, financial investigations and digital forensics.

Many Helping Hands in the Fight Against Corruption

21. The incidence of corruption in Singapore has remained low over the years. However, there will always be some individuals and parties who will be tempted to engage in corrupt acts. The CPIB is committed to enhance our ability to detect and investigate corruption offences, but we recognise that the scourge cannot be overcome by enforcement efforts alone. Support and commitment from different segments of society and strong partnerships with our communities, are necessary to take the fight upstream and keep corruption at bay. The strongest deterrent is a public that continues to eschew corrupt acts and individuals.

22. To tackle corruption more effectively, the CPIB works closely with partners from various industry sectors and the community. Members of the public can do their part to prevent corruption in Singapore by reporting suspected acts of corruption, while private sector companies can also take steps to combat corruption in their business transactions. The CPIB launched the Anti-Corruption Partnership Network (ACPN) in September 2018 to promote ownership over the prevention of corruption in the private sector. The desired outcome is for companies to adopt anti-corruption measures, and inculcate a culture of integrity and business ethics within their organisations and amongst their employees. Through sharing sessions and discussions, companies can tap on one another’s expertise and experience, as well as that of the CPIB, in combating corruption in the business environment.

23. The community has played important roles to stamp out corruption. Last year, 13 individuals (including four public officers) were commended for rejecting bribes of varying amounts. The CPIB will continue to expand our public education and outreach efforts to further strengthen public vigilance against corruption. In particular, the Bureau will tap the ideas and creativity of students from the secondary to tertiary levels for some of our new initiatives.

24. While we remain on top of the corruption situation in Singapore, we cannot be complacent. Let us all remain resolute and committed in the continuing fight against corruption.

[1] The conviction rate excludes withdrawals.
[2] There are 12 countries listed in the table due to joint rankings.